You win some, you lose some... 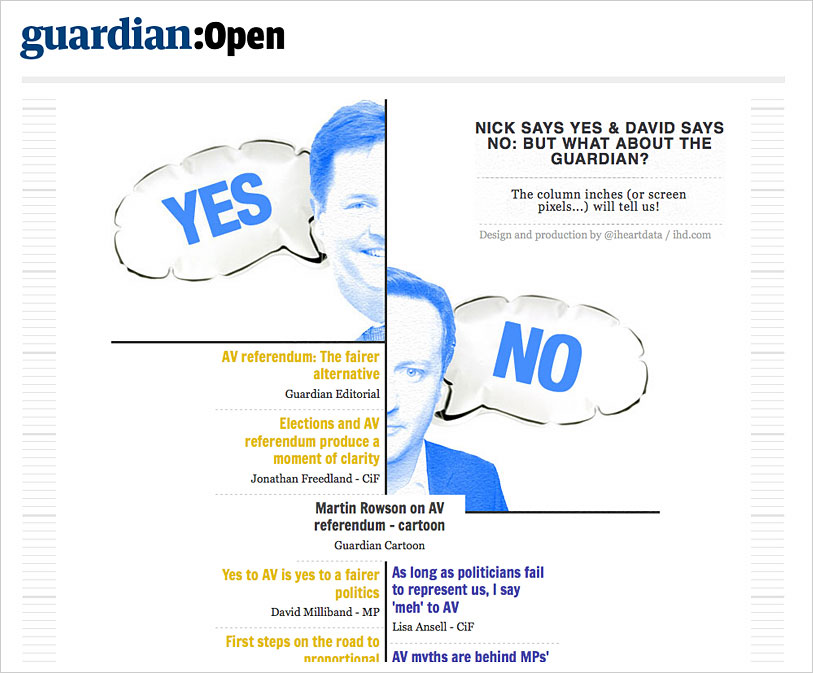 One of the designs I did for the Guardian, looking at opening up data and design task to external developers and contributors

Since my time with Buildor has come to an end I've been working on lots of consulting roles whilst developing other business ideas. I have considered applying for full time positions but very few have felt right or have really fitted the areas I'd like to move into.

One approach I made to a company oh-so-nearly lead to a kinda dream job - but it was snatched from me at the last second! It was with The Guardian.

Whilst I was a News Int I spent a lot of time thinking about how to remove the barrier between management and journalists, and readers.

I was hardly the only one doing so, the whole UGC thing was the hot topic at the time and some very inventive and very foolish plans where executed.

One of the things that really frustrated me when we looked at UGC standalone sites and in-house efforts from other publishers was the quality of the output.

Often the desire was there, the quality of the writing could be good but because of a half-baked approach to templating and design the actual content would look horrible.

It struck me that you could use the network effect of the internet to bring people with complimentary skills together to work on creating stunning content outside of a traditional news room.

Imagine a brilliant photographer in Egypt. They may have the skills to capture the story unravelling before them in pictures but when it comes to writing, design, graphics etc they are lacking.

The news room would supply these skills to make the story into the kind of quality article seen in the Guardian daily, but under a UGC model that luxury (due to cost) does not exist.

Now, if you could create a network of like minded people with differing skills all working together you could still distribute the work effort allowing the creation of really strong content.

So, I picked up the phone twitter and contacted the head of Digital at the Guardian and we started a conversation.

Two meetings later I was being given the tour of the editorial office, money was being discussed and I was getting ready to join the Guardian as a kind of editorial developer - a dream job!

On the second visit I was chewing the fat with the Digital Director when he mentioned he was having an annual review with his bosses that afternoon, didn't seem that unusual...

Three days later I found out he'd "left" The Guardian after that meeting. The dream was over! Quelle horreur!

I was gutted, but you win some, you lose some. It did allow me to flesh out the idea fully though and I also had a play at reimaginning what an article that lived across web, iPhone and iPad could look like.

Maybe it will still be relevant sometime in the future...